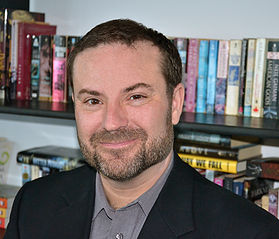 I thought I'd write about more video games.

When I was first offered this opportunity to guest-blog (thanks guys!) and write how games influenced my own writing, I figured I'd tell stories about how my first foray into world-building was in my cramped basement trying to recreate the map from Ultima IV with a pencil and graph paper. And yes, I just used the words Ultima IV, pencil, and graph paper in a single sentence. I'm a little old.

Now sure, that influence has extended throughout my extended life, so much so that my new novel, The Skids, (BLATANT PLUG: COMING OCTOBER 2016! I HAVE NO SHAME!) borrows so heavily from Tron that by halfway through the book you'll expect to see Recognizers coming around every corner. And sure, Tron's a movie, but let's face it: it's a video game.

Yep, I thought I'd be writing about Ultima, or Tron, or Final Fantasy, or Doom, Tomb Raider, Fallout, Burnout, KOTOR, Mass Effect, Fallout again, Tomb Raider again…look, it's a long list. And while I have stolen from—I mean, been influenced by—all of those games and many more, just about all the things I wanted to write about, including the world-building mentioned above, could be summed up in one line of dialogue:

"I just bought a pony made of diamonds. Cause, you'know, I'm rich. I'm thinking of calling him butt-stallion."

So instead of talking about Oblivion or Super Mario Kart or Vagrant Story—seriously, long is the list—I've come to celebrate one simple game: Borderlands 2.

I have a confession: I never finish video games. I finished Final Fantasy VII…I think. I finished the first Knights of the Old Republic. Recently, because it was short and the story was great, I finished the relaunch of Tomb Raider. That's it. Three games in a gaming life long enough have included graph paper.

Because I finished Borderlands 2. Then I played it again with a different character. Then I played it half-way with all of the characters (I could probably walk to Sanctuary blindfolded). Then back to my fav, Gaige, with whom I played all the DLCs. Then True Vault Hunter mode. Then Ultimate Vault Hunter. Then…look, my very extended point is I played the bullymog out of that game.

All the things I love about BL2, things that I try to bring into my own writing, can be seen in that line of dialogue above, uttered early in the game by the villain, Handsome Jack. Although technically it’s an amalgamation of two lines of dialogue, but hey, I cheated. Here’s to console commands!

First and foremost: the line is just funny. The first time I heard it, I laughed out loud and thought: yeah, I think I'm going to like this. Sometimes the genres I tend to write in the most—science fiction and fantasy—can be a bit…uptight about comedy. Or even humour in general. Thank god for horror.

I honestly believe you can’t have great comedy without drama or great drama without comedy. When I watch Zach Galifianakis, I laugh because his pain is real. On the flipside, I once bailed on watching the TV show 24 because I couldn’t believe not one character cracked: “Man, this day is the worst, I say we go for tacos."

Hamlet is funny, people. Actually, Hamlet is hilarious. And that, to me, is great writing. You can be laughing one sentence and crying the next. Borderlands 2 nails that.
I laughed constantly throughout BL2, but even as Jack would zing me from space—more about that later—he'd turn around and commit some horrible atrocity. If you look past the laughter, there are moments when Borderlands gets crazy dark.

My favourite character, by far, is Tiny Tina. I don't think I'm alone in that among people who've played. But while Tina made me giggle almost the entire time I spent with her, if you peel back the façade and actually take a good hard look at her—where she is, how she was orphaned, what her motivations are—then her story is unbelievably sad. And the end of the DLC in which she makes all the other main characters relive the game as a Dungeons & Dragons session was so beautiful I cried. And not a little. Big, gob-smacking tears.

The other thing I like about Handsome Jack’s taunts is they’re all rock-solid dialogue. I love good dialogue and take pride in trying to write it myself. From Jack’s smarmy yet at times cold-as-crap drawl to Mr. Torgue’s over the top bluster, BL2 has great dialogue everywhere. By the way—Mr. Torgue? Imagine the former wrestling great Randy the Macho Man Savage souped up out of his gourd as a politically-correct gun runner. "NOTHING IS MORE BADASS THAN TREATING A WOMAN WITH RESPECT!!!!!!!"

The voices flow out of the broad characters—Clap-Trap’s clap-trap prattle, Moxi’s sexy twang, Patricia Tannis’ sociopathic paranoia—but more importantly, the dialogue is just as strong in its down-to-earth characters that drive the story: Roland, Lilith, and Angel. BL2 is a wild, crazy world, but the dialogue feels real, and so I believe in this world.

And that world is wild and crazy, which brings me to the final thing I love about Jack’s taunt, BL2, and heck, video games in general: If it’s fun, screw logic, let’s do it. The genre of science fiction, particularly SF novels, can get a little obsessive about the laws of physics sometimes. Most times. Okay, almost always a lot. Now I get it, gravity works, nothing can move faster than the speed of light, you can’t curve a bullet, etc. But, you know what? I’m not smart enough to write 2001 or any more appropriately modern reference, and curving a bullet is an awesome idea. So is carrying around three thousand pounds of guns, jumping fifty feet, jumping even higher if you use a grenade to jump (WHAT?!?), suspending people in mid-air, summoning a robot from the ether, and randomly finding loot in boxes and chests that are, you know, just spread all around the world. And yes, I know other games created many of these things—I think Quake did the grenade trick first—but I love how BL2 incorporates all these absurd things and more.

Including having the antagonist taunt you from space on his own little personal—what is that, Skype? Now the idea of the antagonist taunting the hero has appeared in multiple mediums and certainly gets used in gaming a lot—the cake is a lie—but when you think about it, WTF? It doesn’t matter where my character is; Handsome Jack has exactly the right thing to say at exactly the right moment. But if he knows where I am all the time, why doesn’t he just blow me up from space: that would make sense, right? For that matter, how does he even do it? His taunts are clean and clear every time. Who’s his wireless provider? I can’t even get a clear signal from my router half the time and I live in a bachelor apartment the size of a pony. There are so many things about that idea that don’t make sense if you think about it too much.

But who cares? It’s awesome when the villain does it. I liked it so much that I put it in The Skids (COMING SOON, #NOSHAME!!!) Because even if there is a small part of me that wonders if it makes sense, what we get in return is great. We get opportunities for humour, character development, and most importantly, we create tension, an awareness that the threat is always, always, always there. And that’s good fun. It’s good writing, and it’s why I love Borderlands 2.

Ian Keeling is an author, actor and owner of a half-decent beard. His day job is teaching improv and sketch at The Second City, in Toronto, Canada, which is, you know, pretty cool. 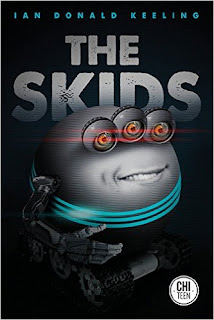 His first novel, The Skids, will be published in October 2016 by ChiZine books, and is a full-throttle cross between the video game Burnout, the Hunger Games, and the Matrix. Which, hopefully, is also pretty cool.