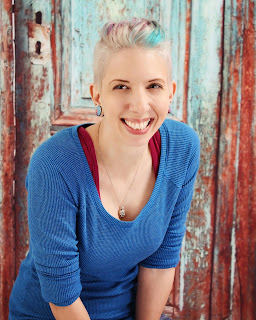 I think it’s no secret that I love Bioware games. With the exception of one—okay, two notable abominations, I have been a Bioware fanatic since Knights of the Old Republic (please, we will not speak of The Unfortunate Sequel). To date, I have over 500 hours clocked in to the Mass Effect franchise, creeping up on 400 in Dragon Age, and prepping for more as Mass Effect: Andromeda nears its release date.

Anyone who has read my books and played the games probably realize exactly how much playing these games flavors my writing.

First of all, Bioware has made a fucking art out of turning a protagonist into A Protagonist™. Of course it’s always about the player in a single-player RPG, but Bioware takes it a step farther.

Between Bioware’s steadfast refusal to canonize Shepard, for example, and their loud and proud public line of validating the player’s choices, they make clear that whatever your Shepard did, it was their choice, the right choice for Shepard, and that’s that.

If it meant your Shepard was a stonecold bastard who Renegaded every chance he got and slept around with everyone he could before the romances tangled? Then that’s Shepard.

If your Shepard was a hardcore diplomat with a heart of gold, cozied up to Liara in the first game but fell for Thane’s “gonna die” zen in the second? That’s Shepard!

Did he make the choice to finish the mission?

Did she decide to play god?

You, as they say, got to do you, boo. And Bioware didn’t flinch.

Mass Effect inspired generations of gamers to believe that their choices, their character, their dialogue mattered, and they only got better with time.

So I thought to myself… Who says I have to stay in a lane designated by some old white guys back in the day? With all due respect to them, I am neither old (yet) or a guy (mostly), but I am white, and as a white female-presenting author, I was tired of being told that my protagonists had to be “heroes”. That they had to be “redeemed”. That they couldn’t have flaws that would make them “unlikable”—and counted among them, I felt, were protagonists of color. Of sexuality different than what the stereotypical “men can sleep around for virility and women can’t because chastity” trope demands.

My Shepard is a badass woman who talked a good Paragon game and pulled a fast Renegade hand. She’s a woman who fell for a crewmate and made a hard fucking choice, only to be betrayed by that same crewmate. She’s pansexual, hard-assed, with a sense of humor and a fierce protectiveness for her crew.

But she ain’t afraid to hit ‘em if they come at her. Or get punched for her troubles.
My Shepard has never been sexually harassed.

I took these choices—this right to make these choices—and I wrote Necrotech without bowing to the establishment. Riko is a thug: angry, loud and crass. She’s a multi-racial balls-to-the-wall woman—shit-talking, sex-loving, aggressively flawed and incredibly skilled. The kind of ambulatory tech-sporting bundle of energy and sinew you hope to god you never meet on the thrashdance floor because she’ll take you out at the knees and leave you with the trash when last call rolls up.

Shepard made choices that no one else can take away from her. So does Riko. As The Protagonist™, her story is her own. Maybe readers will see their playstyle or themselves in her, in her swag or her mistakes, but I never bend to someone else’s demand that my characters be something else. I didn’t start in Dragon Age, when that bastard noble interrupted my wedding, I didn’t start when those old white dudes in SF/F told me women weren’t supposed to act “like men”, and I ain’t starting to bend now.

So thanks, Bioware. Thanks for showing me that I could tell the story I wanted to tell, and that it could be epic and heartwrenching and badass and never even bother to take beauty, gender or tired old limitations into account.

Riko is what she is. She makes the decisions she does because of who she is. I stand by them.

Any good RPG would, too.

After peeling off sixteen layers of outer chitin and hiding the evidence across dimensional planes, K. C. Alexander is now indistinguishable from the rest of the human species. She intends to make the most of this by writing transhumanist sci-fi, epic fantasy, and speculative fiction of all stripes.You can find K C online at her website and on Twitter as @kacealexander 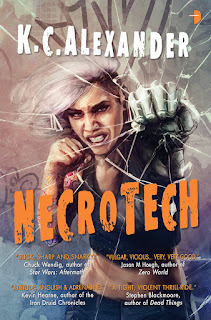 Street thug Riko has some serious issues — memories wiped, reputation tanked, girlfriend turned into a tech-fueled zombie. And the only people who can help are the mercenaries who think she screwed them over.

In an apathetic society devoid of ethics or regulation, where fusing tech and flesh can mean a killing edge or a killer conversion, a massive conspiracy is unfolding that will alter the course of the human condition forever. With corporate meatheads on her ass and a necro-tech blight between her and salvation, Riko is going to have to fight meaner, work smarter, and push harder than she’s ever had to. And that’s just to make it through the day.

This post is part of Blaugust 2016, an initiative to Blog throughout August. For more information visit the Tales of the Aggronaut Blog