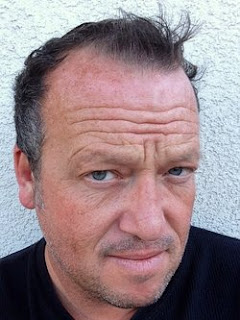 I'm both excited and incredibly humbled to host a post from one of my favourite writers of the moment, Nick Cole, author of Soda Pop Soldier and CtrlAltRevolt who when asked to write a short piece on gaming and writing came up with the following opus. If you haven't already, go check out his work and thank me later. Take it away, Nick...

Hey!  You got your Game in my Idea!

Reese’s Peanut Butter cups.  We take ‘em for granted nowadays.  Like peanut butter and chocolate are some naturally occurring substance.  Imagine that farm!  But, back in the day, before all this, there was some genius who put those two together for the first time... and the world was forever changed.  Even early Reese’ Campaigns focused on the craziness of such a concept as combining peanut butter and chocolate... as though only some idiot savant or mad genius might dare violate the laws of time and space to get their flavor on.

Puttin’ stuff together...  Sometimes it’s crazy enough to work, and, other times it’s an awful disaster.

Nowhere is this more evident in the world of video gaming.  Some concepts work.  Some spiral downward and pancake in a glorious conflagration of internet rage and hot potato corporate blame.  Who would’ve ever thought a game like Minecraft would storm the entire world.  And like most games it’s merely a conglomeration of concepts that fit together nicely.  Blocky eight bit nostalgia, farm sim, and lego.  Go kill a whole bunch of hours in your head.  My personal belief, and Minecraft proves this, is that gamers don’t need a lot of story, or background world-building.  I think they’re telling their own stories and sometimes the game gets in the way with how they’d like you to enjoy their opus.  But I digress.
It’s always an opus, y’know.  That’s what every developer wants you to think.  Including whoever made that SuperMan the Game.  Y’know with the rings.

I’m a writer.  And a gamer.  Writers are really good at putting peanut butter and chocolate together.  Our Pope, Shakespeare, basically ran around gluing history and black sheep family drama together.  And the rest of us have been doing it ever since for the occasional paycheck.  For instance, he would take histories and then mix in a lot of standard intrigue and family relationships, just like any of today’s Star Wars movies and voila, he had a show to stage at the Old Globe.  The Globe was essentially the Sixteenth Centuries XBOX One.  Except everything was multiplayer.  As in everyone watched the same show and even, often participated via insults or vegetables.  In fact, shows were written with scenes intent on breaking the fourth wall.  Scenes expecting the audience to get caught up in the action.

While Big Budget movies and Agenda-driven TV circle the ratings drain, gaming is becoming the next big arena for people to not only get involved in, but even watch via Youtube and Twitch.  And game developers are looking for that peanut butter and chocolate combo that will set the world aflame and earn them a cool sixty million in take home.  Sometimes they’ll do movie tie-ins in hopes of catching the zeitgeist of some nostalgia (Sorry Ghostbusters the Game but you folded a studio) or they’ll try to re-invent the wheel with a brand new Call of Duty or World of Warcraft (Which seem to be the two most popular things in gaming to re-invent.  Not because they’re awesome games, but because the Producer and Studio that’s going to pony up the front dough want those epic levels of fabled return.  So they’re taking a “chance.”)

Putting stuff together in gaming is fun.  And profitable. If it works.  If you nail Peanut Butter and Chocolate.

Like I said I’m a writer and I write video game fiction. Stories set in a world where gaming is huge.  Or a big part of the story.  Not stories set in a video game brand like Halo or Warcraft.  But stories where the hero is a gamer playing a game to solve a mystery, win a bunch of stuff, and hopefully not get killed.

In my book Soda Pop Soldier, my hero, a guy who goes by the tag PerfectQuestion fights in a massive MMO that’s a cross between Call of Duty and Battlefield (My Peanut Butter and Chocolate is a game made up of both.  See... putting things together J.) for a weekly paycheck from a soft drink company.  But he needs some extra dough so he games in this thing called The Black.  It’s illegal and its basically World of Warcraft meets the seedier side of Vegas.
(AAAaand... I’m putting more things together)

Truth is the public is turning away from movies and their fantastic failures as of late.  They’re getting tired.  Whether it’s hacky re-treads of golden age nerdstalgia, or the fact that they, the audience only watch, something’s not working in the solely visual mediums.   Maybe they want to play?  Y’know, be a part of the story?  Get caught up in the action.  The gaming community is hot, huge and growing, and unlike Hollywood, which tries to shut down valid criticism by review sites so no dissent may be brooked regarding their latest re-invention of the same film they’ve shown you the past twenty years, gamers instead have always been passionately vocal about what they don’t like, and what they love.  And even though some people complain about that, well, that’s actually a strength for the industry.  Criticism weeds out the Suicide Squads and Ghostbusters of the video game world and challenges producers and developers to go deep and bring us the next big experience.  And we don’t like it stupid.  It’s got be smart.

Games like No Man’s Sky are proof that game developers get this and they’re still trying to earn your buck with that WOW! Factor.
Peanut Butter and Chocolate can happen at any moment.  You just gotta try some weird stuff and see what works.  And if you do, throw your heart over the bar and make something you’d want to play.  I think that’s still possible in games.  I’m doing it in my writing.  I’m writing fiction about games I’d totally want to play.  In fact, next project’s looking like Twilight 2000 meets Civilization.  So... Game on.  See you in whatever that looks like.

Nick Cole is a former soldier and working actor living in Southern California. When he is not auditioning for commercials, going out for sitcoms or being shot, kicked, stabbed or beaten by the students of various film schools for their projects, he can be found writing books.

Soda Pop Soldier is Call of Duty meets Ready Player One in this fast-paced, action-packed novel from the author of The Wasteland Saga.  Gamer PerfectQuestion fights for ColaCorp in WarWorld, an online Modern Warfare combat sport arena where mega-corporations field entire armies in the battle for real world global advertising-space dominance. Within the immense virtual battlefield, players and bots are high-tech grunts, using drop-ships and state-of-the-art weaponry to wipe each other out.  But times are tough and the rent is due, and when players need extra dough, there's always the Black, an illegal open source tournament where the sick and twisted desires of the future are given free rein in the Wastehavens, a gothic dungeon  fantasy world.  All too soon, the real and virtual worlds collide when PerfectQuestion refuses to become the tool of a mad man intent on hacking the global economy for himself. 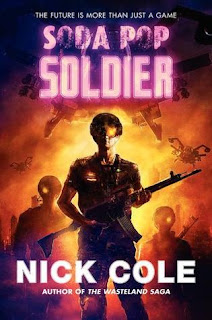 Review
"This smart combination of video-game action and stinging dystopian satire is meticulously assembled... [The narrator] manages to be a tough, snarky warrior battling his corrupt society's worst excesses. This is a cheeky and enjoyable effort by an author to watch." (Publishers Weekly (starred review))

Review
"Gamers and action adventure fans will find something to like here. I devoured this book over the course of one day. I might have finished earlier, but work got in the way." (SFRevu)

Review
"Without a doubt this book is going to be a classic gamer required reading. It is a science-fiction and first-person gamer's nirvana. ...This book is a five out of five stars." (The Nameless Zine)

Review
"Pumping action, and fantastic futuristic battle is matched with a take on modern advertising that I can't help but love. I'm really impressed with how well Cole writes action, I did not want to put this down!"
-BoingBoing.com


This post is part of Blaugust 2016, an initiative to Blog throughout August. For more information visit the Tales of the Aggronaut Blog