Something exciting today - a cover reveal for the upcoming Myth of the the Maker by Bruce R Cordell!

Click on the image for an advance excerpt of the novel. 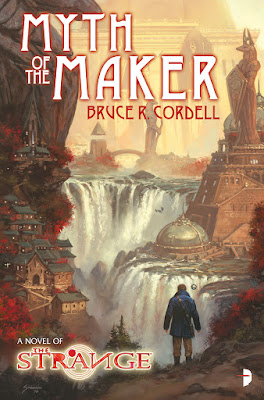 About Myth of the Maker

The mind-expanding novel that seeded The Strange RPG, for all fans of inventive science fiction and fantasy.

Carter Morrison didn’t want to kill his friends, or himself, but he had a good reason. It was either them, or the end of all life on the planet: their sacrifice saved the world.

Not that anyone knew it, until Katherine Manners stumbled over a melting man in a computer room clutching a message of doom from another world.

Myth of the Maker is a tie-in novel to Monte Cook and Bruce R Cordell's The Strange RPG. 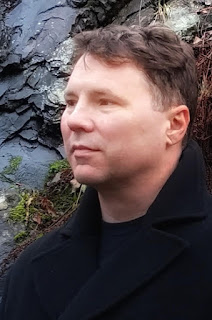 Bruce R Cordell is an award-winning writer working as a Senior Designer at Monte Cook Games, where he is an author for The Strange and Numenera roleplaying games. Before that, he wrote for Dungeons & Dragons over four editions and nine novels set in the bestselling Forgotten Realms setting.

Monte Cook and Bruce R. Cordell, in their first major collaboration, bring you The Strange. It’s an RPG set on Earth, in the modern day. But a few people—a very few people—have discovered how to travel to other places. They call them recursions, and they’re like limited pocket dimensions with their own laws of reality, connected to Earth via a dark energy network beneath the normal matter of the universe. A dangerous, chaotic network they call the Strange.
Recursions spawn from the myths, legends, and fiction of humanity, so the setting of virtually any story, film, or novel could form a recursion, as could any mythical realm or place of legend. They aren’t entire parallel universes—they’re limited in scope, rarely larger than a continent and sometimes not much bigger than a city block. Often the denizens aren’t even self-aware, but are little more than automatons going through the motions of their fictional world.
But sometimes, in the larger or more mature recursions, they have the spark: Self awareness. Sentience. The ability to form their own motivations and agendas.
And some of those beings understand that they aren’t alone in the Strange. Some of them know about Earth, and the limitless universe beyond it. And some of them are very, very dangerous.
In our own world, there are individuals who secretly travel to these recursions—perhaps for adventure, perhaps for profit. But there are others with more nefarious motives, and conspiratorial organizations operating in the shadows, looking to exploit the Strange and its recursions for their own ends. And some of them are also very, very dangerous.
Your character is quickened; you’re one of the ones who can travel into Earth’s shoals to discover and explore the seemingly limitless recursions around our world. Oz. Barsoom. Asgard. The Dreamlands. The Victorian London of Sherlock Holmes. The setting of your favorite novel or movie. Worlds even more exotic or bizarre, driven by laws of magic, psionics, or weird science. When you visit these worlds, you adapt to them, taking on some of the physical aspects and knowledge of the natives. You become, in part at least, a different version of yourself.
What will you find when you venture into Earth’s shoals? And what will find you, as you travel into The Strange.